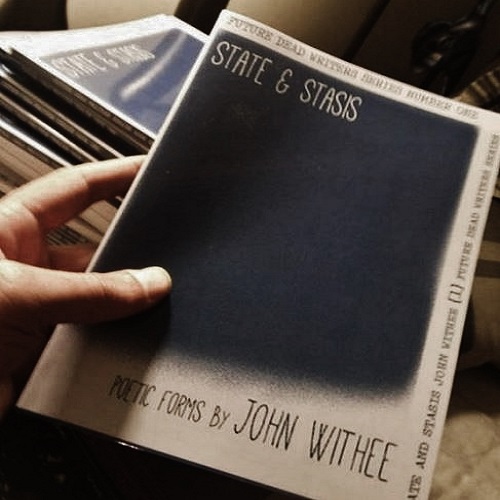 (Two will be ready at time of publication of this post. The other three will be released next Wednesday, October 2nd.)

A. State and Stasis by John Withee
B. The Fear and The Going, Book One, The Going, A.H.K
C. An Untitled and Written E.P #2, A.H.K
D. Summer Travelin’ Books, Non Digital Adventures In American writing, A.H.K
E. A Flask of Gin, by Auden Wyatt

There’s always more to the story.

This will be the longest update that will be posted on this site for a very long time. The story isn’t even close to the middle part yet, let alone the ending. These books are real, as real as human eyes.

Part of the reason West Vine Press is named what it is, is because that’s the name of the street where these handmade books with gorilla glue and old paper were printed until there was no more ink and no more paper, computers froze and printers malfunctioning. The life got better than worse than now its alright, and the process is slowly being experimented with and becoming more refined. People always laugh when they’re told it’s gorilla glue (bottle says made in U.S.A and it can’t be good for you to inhale and seep into your skin….oh well) the glue (seriously this stuff holds for years and many of the books have aged incredibly well like fine damn wine) could be covered.

A spine was fleshed in. Didn’t feel the same looking more “Legit”. The glue wont be covered. It gives a feeling of a real object, worn and tired, but ready for night or day, battle or love, peace or adventure, and it’s something that means something personal to the artist of the book.

Years later and hands are still working in the mines. Uncut sheets of paper abandoned in old paper mills were recovered (with the markings of specifications during war time) and the binding process has been learned through years of trial and error. Some people get it. Other people don’t care. They’ve been left at shops and they’ve sat around collecting dust until they’ve been pulled from the shelves and then given to people who enjoy writers and words, and they’ve been left at other shops and surprisingly sold out. It’s all nonsense and West Vine Press doesn’t have time to go back to the drawing board, the game is late, and regardless of the fact of what the point is, three hundred sample copies of the five said West Vine Press books have been made at random, each containing twelve or more pages of text and concept art, of both the writing and the craft of marketing, as well as the process of book making that West Vine Press has basically made up like a kid would do building shelter in the wild. Twenty were sold (five were given out inebriated to who knows) last weekend and the decision was made (spontaneously and why the hell not) to make all three hundred of the planned pressing. Many late nights later and the one hundredth has been glued.

The number is three hundred. Prior editions were 50 and 250 respectively. It’s not a sales pitch. It’s just what it is. Limited. These books will stand the test of time (?) regardless if people buy them or not, and that’s why it has been decided by the editors of West Vine Press that they will not be free. They cost five dollars and will be taken on the not everybody goes home in October, An American Book Tour, (tentatively) beginning October eighth 2013.

If you would like one of the books you can email the press at the following email and the price for those will be eight dollars which includes standard media shipping, and or more, based on if you live out of the country that is named the United States of America. Not because you do, but because it’s further away. Whatever the case may be…

There are more traditional bookstore quality West Vine Press Books that can be purchased on this site by clicking buy west vine press books.

That’s it. More to come…stay tuned…

P.S. State and Stasis. Book One. Future Dead Writers Series is now out. Of course if you’ve read this far you know what else could be said. No need for repeating like a robot at a superstore. Thank you for reading. We now return you to your nice and normal broadcast. See you again before or on, the next full moon.

If you would like to print and post these in real life or have one in your hands for free or to wear as a hat, you will find a link Underneath to the PDF File. 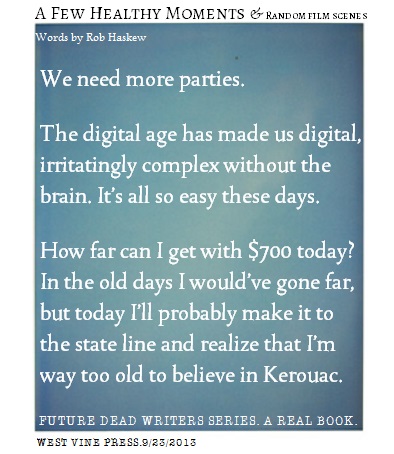